“The further a society drifts from the truth, the more it will hate those who speak it” from George Orwell’s “Nineteen Eighty-Four” really explains what is going on today with politics in America currently. I don’t want to get that political because people are sensitive as **** nowadays with their side they stay comfortably aligned with. Typing about the election as we live through history just seems right to do so this blog has a bit of my opinion sprinkled in.

What is going on in Venezuela politically is slightly going on here in America. Some back Juan Guaido, but the government of Venezuela still backs Nicolas Maduro. Lots of people recognized Juan Guaido as the winner, at least America does. I don’t think America has reached this level of political uncertainty because our democracy is much stronger but it’s important to note that we do not want to go on further having two presidents just because one cannot accept defeat. It is sad to see what else is going on in Venezuela with the sanctions plus the pandemic now and the political instability is just making it worst. With a president in America trying to decide if it’s up to him if he loses or wins like Maduro has the last two years; it’s worth typing about it in my blog. I am thankful to live in America, I root for the home team.

The media you watch is completely allowed to slant the “news” whichever way they want. They can do it so well that you will believe it slowly through not just one television program but in multiple programs: keyword, program. They need you to watch tomorrow, if you feel any cognitive dissonance you will simply just change the channel. People want to hear what they believe. They need that confirmation bias so they can then feel like they have the “truth” when it’s all just part of the programming from the media company.

I already read that “Keep Calm And Carry On” by Mark A. Reinecke already once but that was years ago, and I want to study the book more than just reading it once. It’s a short book of just 125 pages and I am going to break each lesson down in photos on my phone and read all twenty lessons again. I have two Robert Greene books I want to read also but still haven’t. I like reading on my phone rather than a physical book. I was given a book called “The Fred Factor” about working as a new employee somewhere but seemed to lose it somehow. I also started “The 48 laws of power” by Robert Greene for a second time; because I have changed, and it’s been years now since I finished it. I am reading it with a sober mind this time and it’s completely different this time.

I wonder if there are prayers for every hour of the day; like that go with certain apostles or constellations. My family in Connecticut prays with the same prayer as my family in Iowa. It’s a Catholic prayer and we always went to a Lutheran church growing up. The times my Iowa family went to church in Iowa it was a Catholic church. I am a gnostic Christian, also a master mason, which has led me on this spiritual journey in life where I have tried to learn and soak in as much esoteric gnostic knowledge as possible. I used to be really into journaling every piece of knowledge I learned off the internet and in books. I stopped that completely though because it was mainly because it was all fueled by alcohol. They literally call alcohol “spirits”, and I would get drunk and read the books I have for things to write down in my journals. I would draw pictures on some pages and I just called the journals “art books”. I don’t think anyone cares or would want to even see them, but it was art therapy for me and one drunken night after another the journals filled up. There are 5 journals, locked away in my suitcase now.

I am trying to create content for social media, if any questions came to you about why I am typing blogs. It helps to put myself out into the universe more so people can get to know me more since I don’t see many people. I have my Snapchat group brothers I met off Boxden.com that I gathered all the Snapchat names and created a group way back in 2015 when I moved back to Connecticut. Snapchat, Instagram, & Twitter now have the same stories feature, plus since Instagram and Facebook are the same company you can share the Instagram story to Facebook stories. Snapchat started it all with the 24-hour post, but Instagram is the best with all you can add to it. That is one thing Mark Zuckerberg does well, steals someone’s idea and makes it better, he stole Myspace.com and just improved it with Facebook.com. Zuckerberg also stole “stories” and improved it.

I decided on my official Musicbanter.com music Journal thread title for next year; “Shhon’s Music Journal 2021” launching on the first of January. It’ll be where I do microblogging throughout the week like I have done for years now. One memory I think about a lot is when Mike, Chris, and I sold candy door to door in the Quad Cities, for a company called America’s Future. It was kids from ages 12-16 that would get picked up from a van from around 3:30 pm – 4:00 pm and be given a crate of candy to sell for $5.50 a box and we sold a lot of candy. I think it was a convenience factor because we knocked on the door rather than someone having to get in the car and drive to the store for snacks. We had a mini-speech we said when they answered, and we would get $1.25 per box sold. I still don’t understand how the owner kept track of us all to refill our crates without everyone having cellphones as we all do now.

Nirvana is a band I grew up with, I was listening to “Nevermind” in grade school and just thought the band was great and probably didn’t know anything different at that time. I had the cassette tape because CD Walkman wasn’t even invented. By the time I got into my teens; a friend name Chris that lived with us but was more like a brother to me put me onto their other albums. We would walk to Coop Records on Locust Street in Davenport, next to Big 10 gas station, and buy used rock CDs. “You know you’re right” was the single off this album when they released it and its sort of like a greatest hits album with a new single that was also great. Kurt Cobain has always vibed with me, the lyrics to his songs have always been on my mind throughout the years. The titles of these songs have always been in my head and I have tried to try and understand what the meanings of the lyrics are.

This album just reminds me of the ’90s, but also in the 2000s when this collection of songs was released. “I love you, I'm not gonna crack” from “Lithium” is saying “crack”; I always thought he was saying “I’m not coming back” according to genius.com. “lithium” only has 4 lines for each verse and only two verses. Kurt didn’t write much but he always made a great song from the little lyrics in the song. “The Man Who Sold the World” from the album is a David Bowie cover and it’s great but I think the album's best track is “In Bloom”. “Sell the kids for food/ Weather changes moods/Spring is here again/Reproductive glands” from the start of “In Bloom” is just random thoughts but also make for a great song somehow the way Kurt sings them. “Bruises on the fruit/ Tender age in bloom” from the second verse in “In Bloom” where the title of the song is mentioned but I always thought he was saying “Time to Rage and bloom”. 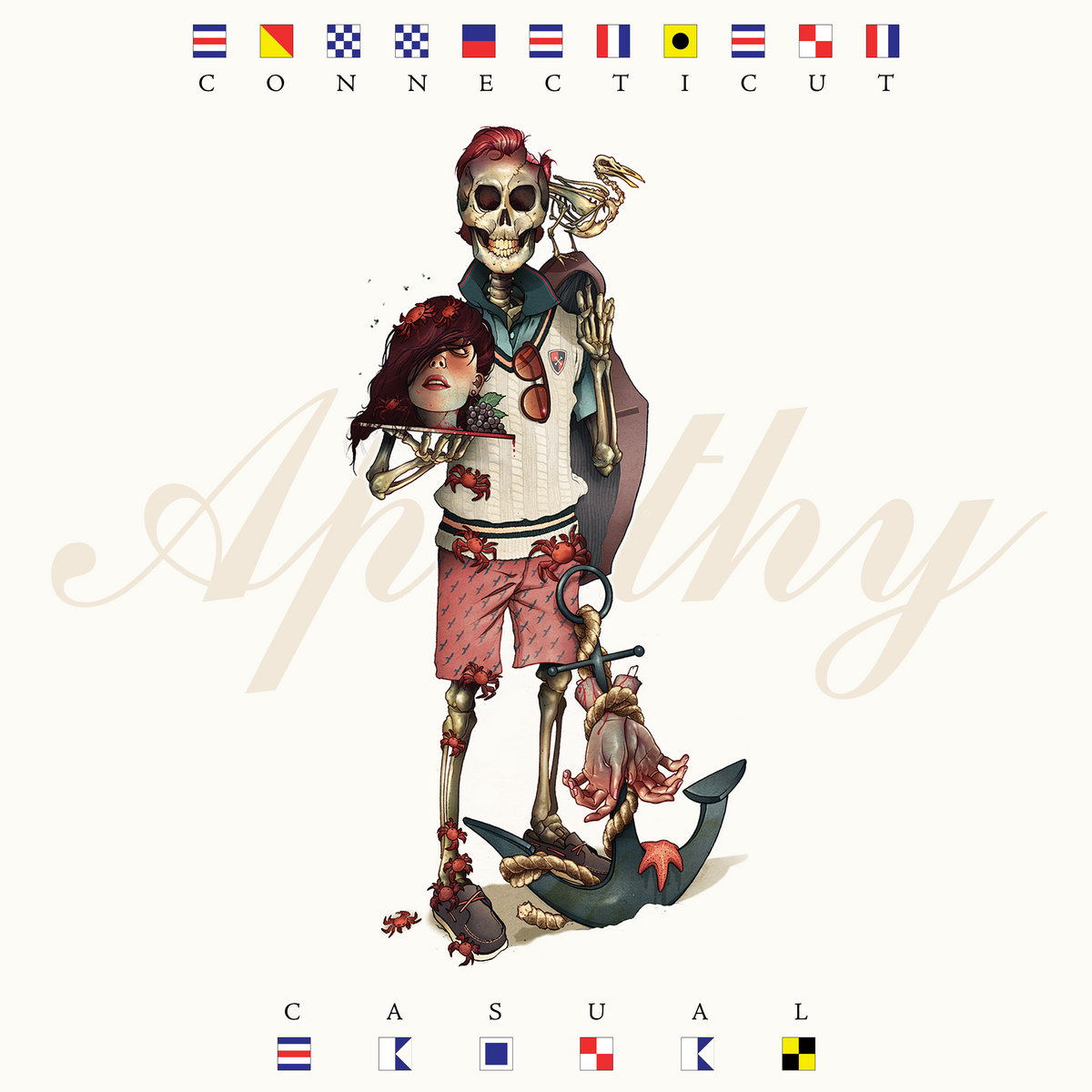 This album for me is Apathy’s best, every song is nice, and it gave me that feeling I was still in Connecticut when I moved to Iowa in 2012. “The Grand Leveler” is a masonic-themed song that connects with me because he is a member of the same lodge, I did my EA degree here in Connecticut. I love the rock samples Apathy did on this album, sampling The Red Hot Chili Peppers on the title track “Connecticut Casual”. The Smashing Pumpkins sample on “Underground Chick” sounds great and the flows on all the songs are top-level stuff. Apathy is a great producer also and has great sampling abilities, the Jay-Z sample on “The Curse of the Kennedys” is also good. Chris Webby makes one of the few guest appearances on the album in “Back in New England” but it listed part of the credits on Spotify on lots of tracks. Anoyd’s verse on “Locals Only!” is nice too.

“Three is the magic number, the stars on the belt of the hunter/ The pyramids of Giza that were built directly under” from “The Grand Leveler” must be the first time this has ever been said in any hip-hop song. “So get your North Face motherfucker the winter's begun”, also from “The Grand Leveler” is something I say in my head every time I see someone out here in Connecticut. I live in Connecticut, which is another reason why this album connected with me so much. The sampled hook for “The Curse of the Kennedys” is from Jay-Z’s “Pray” and is a nice song about conspiracy theories sort of.